I needed to get my harp appraised, and fortunately, the original company that made it is still in business, Lyon & Healy. They survived the Great Fire of Chicago in 1871 and after making, selling, and repairing other instruments, started making harps in 1889.

While waiting for the appraisal, the person on the phone said “Did you know we have a facsimile of our 1899 catalog, and in the back is a list of the serial numbers and the purchaser? And there is a testimonial and picture of your harp?"

The catalog is a brief overview of why Lyon & Healy harps are The Best, and a listing of their seven models available for purchase. But the bulk of the catalog is solicited testimonials or Indorsements [sic].

Flipping through the catalog, one can see pictures of people in their Victorian finery posing with their harps. Women in corseted dresses with massively puffed sleeves or in delicate dresses with cascades of flowers. Men in tuxedos with impeccable posture and handlebar mustaches. Children in shorter dresses, which make the puffed sleeves look even more colossal.

Then you get to my harp and my harp's owner. 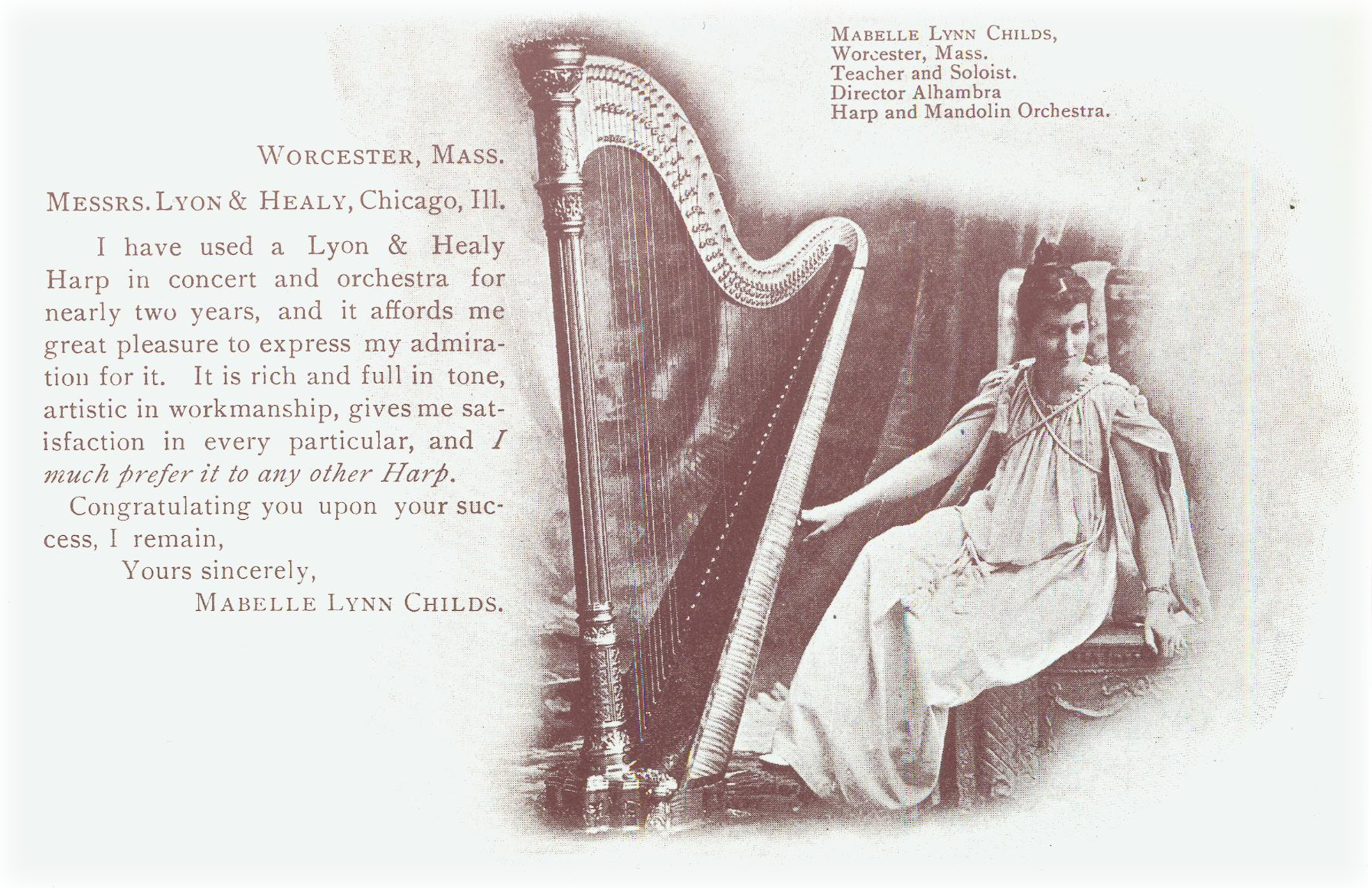 I had to know more.

At the time this photo was taken, she was known as Mabelle Lynn Childs, and was on her second of three husbands.

She is also listed in the photo as a teacher and soloist, and Director of The Alhambra Harp and Mandolin Orchestra. Mandolin orchestras were popular in the 1890s, but in my research, I found no information on how a harp would fit into that. I did discover that the recommended temperature for concert halls was 65℉ (18℃) in order to keep people awake. Yikes. Apparently, it was assumed the music wouldn’t.

“Alhambra" may have had some meaning for her, or she may have appropriated it because she thought it gave her groups an air of mystique. She may have gotten Washington Irving’s book “Tales of the Alhambra" when she was a young girl - it had been updated and republished just a few years before she was born. Maybe she traveled. Or she may have been influenced by “Alhambrismo" which was a music and literary aesthetic of the time created around the famous building (which also influenced a couple Debussy tunes.) Only having her picture, I really can't tell.

I wonder if Mabelle had been musical all her life? I’m suspect of this, because just two years after getting her Lyon and Healy harp, she was a soloist and teacher. On the one hand, the harp is incredibly challenging to play, but on the other, you don’t have to be that skilled for it to sound great. It’s a harp.

An article published in The Chautauquan in 1898 (v27) talks about how the harp was experiencing a resurgence and public demand for it meant novices were able to command prices of established artists, $50 - $100 (~ $1,600 - $3,300 in 2022). It gave a lot of young women means. Mabelle was included in their list of "successful and widely known American harpists".

Unfortunately, the “Alhambra” groups seem to have disappeared around the time her mother passed away in 1903.

She started breeding cats in 1903, first King Muffy II, then Lady Blackthorn Fawe, Silver Bell Lynn, and Glorious Lady Betty. Some other names I found in my research: Spangle Spangle, Admiral Vermillion, Buster Biggs, and um, Buttsy Boy? I take comfort knowing that people have always had a flair for naming their cats.

In 1905, Mabelle and Harry were listed in the city directory as living at different addresses. In 1906, she was listed in The United States Register and Studbook for Cats, Volume 1, as the owner of a cat (Tootsie, female long-haired brown tabby with golden eyes) with a man who was not her husband, and in the city directory also, possibly as owning a building with yet another man who was not her husband, this time Henry L. Jacobs, who she would go on to marry after divorcing Harry. 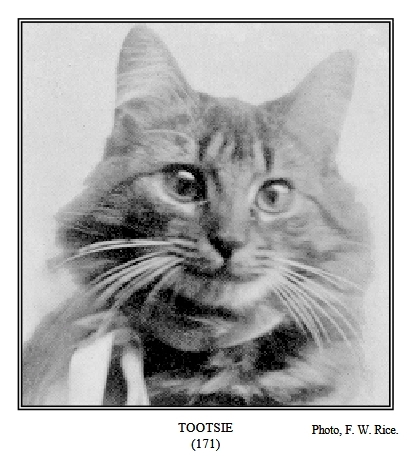 But then in 1907-8, both Mabelle and Harry are listed as living in that building!

In 1909, Mabelle and Henry got married in East Providence, RI.

Mabelle probably had a tidy sum to her name both from playing the harp and breeding expensive cats, and Henry was a merchant. In East Providence, they lived for a short time in an apartment house, with a German chauffeur and a Japanese chef, then moved to a house they called Lynnhurst where they had enough land that Mabelle could have an entire separate bungalow built to house all her show cats.

Lynnhurst may have been a reference to Mabelle’s biological father. Born Hattie (Harriet or Henrietta?) Mabelle Lynn in 1868, a few years after the Civil War ended, she grew up in Worcester, Massachusetts, with her mother, maternal grandmother, and stepfather, who was a veteran (Union) and a police officer, and had a tattoo on his left forearm.

Charles Lynn, was also a Union soldier, and worked at a Civil War Hospital and later became a doctor. Charles and Sarah divorced sometime before Mabelle was 4 years old. I assume Mabelle kept him in her life, because she kept his surname for the rest of her life.

And maybe the divorce and that upheaval contributed to her first marriage on New Year’s Eve when she was sixteen. Sixteen.

Anyway, yes, she had an entire separate building for her cats. And these were some amazing cats, according to an article in The Providence Sunday Journal. Stalwart of Lynnhurst, Fanchon, Regal Starlight, and King Muffy II were the stars of the cat shows in New York and Boston in 1913. 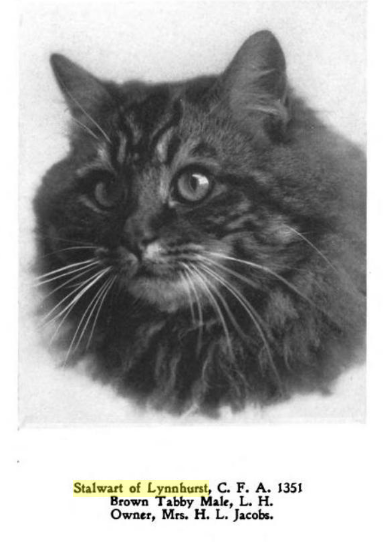 Known at this point as Mrs. H. L. Jacobs, she was one of the founders and president of the Rhode Island Cat Club. Her cats were p a m p e r e d:

"Their diet is composed of fresh raw chicken, fresh raw rabbit and fresh raw egg and pure water. The chickens and rabbits are raised at Lynnhurst so that the pets are assured of pure food and they are given almost constant attention by a man employed for the purpose whose duty it is to groom the animals once a day."

I couldn’t find any mention in the article of her as a former or current harpist. I wonder at this point if she even had it anymore, or had sold it before she left Worcester. I bought it in Boston.